Before Kathrine Switzer became a historic figure in women’s sports, as the first woman to formally enter and complete the Boston Marathon and the driving force behind the women's marathon being added to the Olympics, she started running in her backyard in Dunn Loring, on Westchester Drive just west of Gallows Road. And then she ran along a new road then under construction, to be called the Capital Beltway. And then, when it was new and lightly traveled, she ran on the median of the Capital Beltway. Switzer attended the old Dunn Loring Elementary School, then James Madison High School in Vienna, and then in 1962 she was in the first class that would graduate from George C. Marshall High School in Falls Church. She is returning to Marshall in November to mark the 50th anniversary of the school’s founding, and to help raise money to upgrade the school.

As a young girl in the 1950s, Switzer aspired to be a cheerleader. Her father, Army Col. W. Homer Switzer, told her she didn’t want to do that. “You want people to cheer for you.” He suggested she play field hockey, and train for it by running a mile every day, Switzer said.

So in their three-quarters of an acre lot on Westchester Drive, they determined that seven laps around the property was a mile. And so a legendary career in running and feminist activism was born, to be fully ignited when she ran her first Boston Marathon, which was captured in a photo that Life Magazine later declared one of the “100 Photos That Changed the World.”

Switzer is now 65, but she still runs marathons. Marathons as in 26 miles and 385 yards. Last year, in New Zealand, she ran an off-road marathon with 28 river crossings and won her age group. In five years, when she is 70, she hopes to run Boston again on the 50th anniversary of that groundbreaking event. 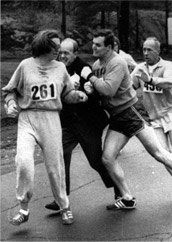 Switzer is also an author, a motivational speaker, a television commentator and entrepreneur. Her book, “Marathon Woman,” has launched her as a brand itself, and she often encounters women wearing the number 261, which she wore in her first Boston run.

But growing up in Fairfax County in the 1950s and ‘60s, Switzer said she didn’t feel discouraged or disenfranchised. She called Marshall “a very go-ahead school. A school that really gave us so much. I guess it was the wealthy county and everybody working for the government. Everything was taking off.”

Her father fought in World War II and Korea. Her mother, Virginia Switzer, taught at Annandale High School for four years and then was guidance director at Fairfax High School for 17 years. In 1957, the family moved to Dunn Loring, a neighborhood close to Vienna and Falls Church and now hemmed in by both the Beltway and Interstate 66.

After her father convinced her to run laps around the yard on Westchester Drive, she easily made the field hockey team at Madison High School under Margaret Birch and excelled, though she’d never played before. And something in her mind clicked. 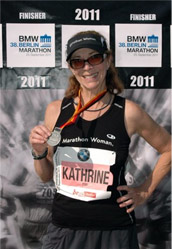 “I grew up thinking that running was magic,” Switzer said. “I got this sense of empowerment every day I ran. That’s why I try to pass that on, to kids or even old women. Once I had that sense of empowerment, that translates into everything you can do...if you have a victory under your belt every day, you feel like you can do anything.”

After starting high school at Madison, Switzer’s junior class was chosen to be the first to enter the new George C. Marshall High School on Route 7 just east of Tysons Corner. But the school wasn’t ready by the time her junior year started, so her class went in the morning to McLean High School — McLean’s regular students went in the afternoon — until Marshall was ready in 1962. At both Madison and Marshall, in addition to playing field hockey and basketball, Switzer also worked on the school newspaper, where she had a journalism career in mind. Her byline was ”K.V. Switzer,” both because she loved authors such as J.D. Salinger and e.e. cummings, and because her father misspelled Katherine on her birth certificate.

After graduating from Marshall in 1964, Switzer went to Lynchburg College. She continued to play field hockey and continued to run. There was no women’s track team, but the men’s coach saw her running near campus, and recruited her and another woman to run the mile in some meets in the Dixie Conference. The two women were the first to letter in a men’s sport at Lynchburg, and were featured in Sports Illustrated’s “Faces in the Crowd” column. She said Harden and Weaver, the longtime stalwarts of WMAL’s morning radio show, would mention her on air and warn drivers on the new Beltway to watch out for her in the median. 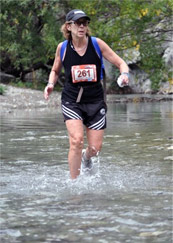 Switzer also wrote for the school paper at Lynchburg, and did a story in 1966 on two students who had run the Boston Marathon. Switzer said she wanted to run Boston. A woman that year had jumped onto the course after the race started, and ran a good time, but it wasn’t official.

“I was very impressed with that,” Switzer said. Intent on a career in journalism, Switzer transferred to Syracuse University’s prestigious communications school in the fall of 1966. She wasn’t allowed to run in meets with the men’s team — and there was no women’s track or cross country team — but she was allowed to train with the men.

It was there she met an assistant track coach named Arnie Briggs, whom she described as “the most influential person, other than my parents, in my life.” Briggs ran with Switzer and told her stories of his time in the track world, including his Boston Marathon runs.

When Switzer suggested she should run the race, “he said, ‘A woman can’t do it. No dame’s ever run a marathon. Women are too weak and too fragile.’” Switzer pointed out that it had been done by women, unofficially, but Briggs said that they had “jumped out of the bushes. He was really snippy with me. But he did say, ‘If any woman could do it, you could do it.’”

They began increasing the distances they ran, and Briggs promised to accompany her to Boston if she could prove she was up to the task. In a key practice run, Switzer said they reached 26 miles and she was unsure if they’d measured the distance properly. So they went five more miles, which not only knocked Briggs out, but convinced him women could run marathons.

There was nothing in the Boston rule book or entry form about gender. On her entry form, Switzer applied the way she always signed her name, and her bylines: K.V. Switzer. Briggs went to pick up the Syracuse team’s race numbers and Switzer pinned on the historic “261.” But she made no attempt to hide the fact that she was female. She wore earrings and had longer hair. She said other runners were encouraging, and off she went with the huge pack.

A couple of miles in, reporters on the press truck covering the race spotted Switzer, and pointed her out to race director Jock Semple. Semple “jumped off the back and attacked me,” Switzer said. “He said, ‘Get the hell out of my race.’ He pulled on my shoulders and tried to pull my number off.”

But her boyfriend, Syracuse hammer thrower Tom Miller, who was running though he had not trained, put a shoulder into Semple and knocked him down. “Tom just flattened him,” Switzer said. “Then he said, ‘Run like hell.’”

The entire encounter was photographed by the press truck, and the photos had gone out on the wire before Switzer ever finished. She finished in 4:20, a time she would improve over the years by nearly 90 minutes, to a 2:51 in 1975. But that first run, and her willingness to crack the all-male institution of Boston, rocked the world.

“When I finished, I felt fabulous,” Switzer said. “I felt like I had a whole life plan ahead of me, a whole goal. I wanted to be a better athlete. I wanted other women to be in the race. And I wanted women who wouldn’t be afraid. And women who would have scholarships and have opportunities.”

Women, initially banned by the AAU from competing with men, were officially welcomed into Boston in 1972. Switzer won the New York City Marathon in 1974, and then ran the remarkable 2:51 in Boston the following year, where she placed second.

Switzer used her skills as a journalist to lobby Avon Cosmetics to create a racing circuit exclusively for women and Avon agreed, sponsoring races that eventually occurred in 27 counties with one million runners.

Using the contacts she made along that path, Switzer began working with national sports federations to join the campaign to add more women’s running events to the Olympics. When Switzer first began running, there was nothing beyond the 800 meters for women.

But by the 1980s, she had 27 countries on five continents on board for a women’s marathon. The 1984 Olympics were in Los Angeles, which was receptive as well, and the event debuted that summer, with American Joan Benoit taking the gold.

She became a regular TV commentator at women’s marathons and other events and wrote three books, including her memoir, “Marathon Woman” in 2007. In 2011, she was inducted into the National Women’s Hall of Fame.

Switzer has nothing but fond memories of her time growing up in Dunn Loring, in part because she hadn’t really run into much discrimination against women here. Even as late as 1966, when she had transferred to Syracuse, “I didn’t understand feminism. I was naive. I hadn’t been denied opportunities.”

She said Marshall High offered all the perks available to teens in the early ‘60s, although its new athletic fields were a bit rough. “They were lumpy and uneven, but that made us very good” at field hockey, she said.

Switzer, who lived for a number of years in the Dunn Loring area with her husband, now divides her time between New York and New Zealand. But she is enthusiastic about being the keynote speaker at Marshall’s 50th Anniversary Gala Celebration, and insisted I tell you that it will be held at the Fairview Park Marriott in Falls Church on Nov. 9, and tickets and more information is available at www.gcmptsa.org or at the school.